The pandemic is still on the News. Politics and home affairs occupy 42%.

The pandemic is still on the News. Politics and home affairs occupy 42%. 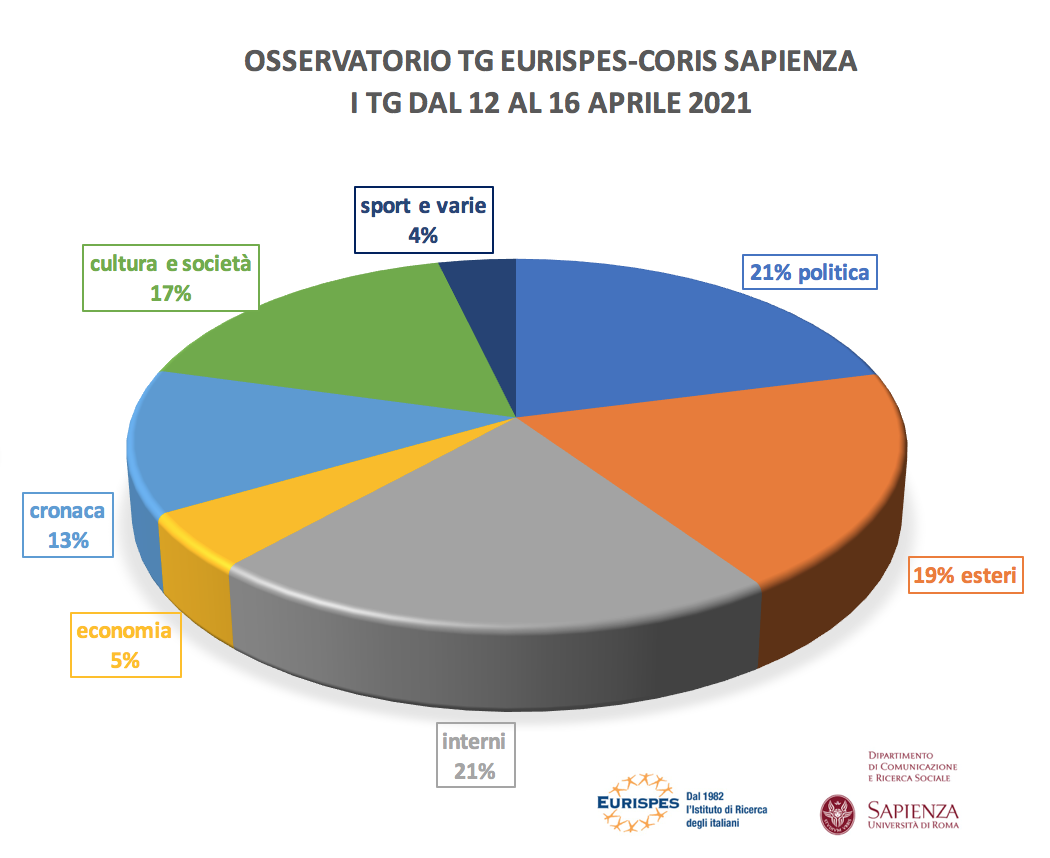 With 26 openings between Monday and Friday, the pandemic is once again the dominant theme for all editions this week. Accompanying the announcement of reopenings on 26 April, Prime Minister Draghi spoke on Friday of a “reasoned risk” (the first headline in all of them), and the newspapers dismissed the concern expressed between Monday and Tuesday following the problems with the Johnson & Johnson vaccine. The new budget gap of 40 billion (opening Thursday for Tg1, Tg2 and Tg5) that brings the public debt to almost 160%, does not produce a particular alarm, except for a mention in the headlines of Tg La7.

These are some of the results that emerged from the analysis of the  TV News Eurispes – CoRiS Sapienza Observatory from 12 to 16 April.

Amongst substantially copycat editions, Wednesday’s Tg3 chose to open on the parliamentary initiative of Italian citizenship for Patrick Zaki (headlines also for the other Tg Rai and La7), analysing the problems that accompany this decisive stance. Also on Wednesday, Tg4 and La7 offered space to other topics, dedicating the first headline to Erdogan’s attacks on Prime Minister Draghi – who last week referred to the Turkish leader as a “dictator” for the “sofa-gate” affair. Mentana’s second headline was about the “sensational breakthrough” in the investigations into the Regeni case, which would confirm the attempted deception by the 007s in Cairo.

The attitude towards Minister Roberto Speranza, who was criticised this week by Fratelli d’Italia and other centre-right forces, is different. The Health Minister is, after Conte, the political personality most present in the headlines, with 23 references. In the Mediaset news, the attacks are widely reported, while the Rai news does not pay particular attention to them. Tg La7 underlines the armouring of Speranza by Draghi and, in substance, by the entire majority, reconfirmed also on Friday by Tg4. Also in the Mediaset Tg space to the investigations concerning the former Commissioner Arcuri for the supply of masks not up to standard (headlines for Tg4) and the story of the WHO report withdrawn by the Deputy Director Ranieri Guerra.

The spotlight was on Biden’s America after the announcement of the withdrawal of troops from Afghanistan: headlines on Wednesday for Studio Aperto and Tg3. On Thursday, the same newspapers reported further episodes of violence and repression in the city of Minneapolis, which was also in the news for the George Floyd murder trial. Also on Thursday, Tg3 and Tg1 decided to focus on the picture of the year chosen by the Word Press Foundation, which focuses on the tragedy in Brazil, with thousands of deaths caused by Covid every day. Great attention for Mediaset Tg to the preparations for the funeral of Philip of Edinburgh, with several headlines throughout the week.

Moderate attention by all prime time TV news to the impact of the crisis on the economic fabric and employment, with Mediaset news opening on Monday on further protests by traders. The battle of an ArcelorMittal employee – dismissed after expressing on social networks his appreciation for a Canale 5 TV fiction dealing with pollution-related illnesses – was followed and supported with great attention by the Mediaset news, with numerous headlines and reports. These coverages contribute to bringing the complex story of the former Ilva back at the centre of attention, even if there are plenty of sequences of the fiction, in a logic typical of TV network promos.

Last news
ARCHIVE NEWS
CONTACTS
CHANGE LANGUAGE
DOWNLOAD BROCHURE
Download brochure
Eurispes - Institute of Political, Economic and Social Studies | C.F. 05505580588
Termini e condizioni | Privacy
All rights reserved. The information contained in our research and publications and in other areas of the portal are protected by copyright, cannot be reproduced in full, but it is possible to use the contents on condition that the source is cited and that the information itself and the extracted data are not modified.
Powered by Provisiva